“Taping of Animal Farm Cruelty is Becoming the Crime” 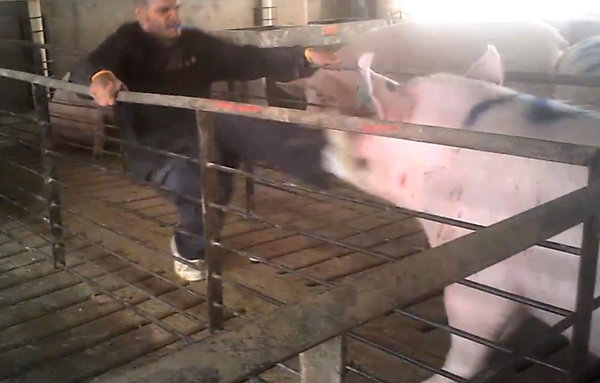 In many states around the U.S., filming of factory farms is becoming a federal crime due to so-called “Ag-Gag” bills.  Activists are worries that this could deter whistler-blowers from finding out about illegal and immoral activities in factory farms and other places.  If film of such behavior is obtained, the activists have 24 to 48 hours to overturn it to law enforcement authorities.  However, many activists argue, it takes much longer than 2 days to gather enough information for action against these factory farms.  These bills also require that when applying for employment, they must disclose their motives of filming.  This prevents many activists from being hired in the first place, thus deterring evidence from being obtained.  Large corporations have pushed for such legislation to restrict filming of the factory farms.  They call the activity recorded in the films “disturbing and completely unacceptable,” but they still haven’t made any substantial changes to prevent such behavior. [9]

“North Carolina’s Republican Gov. Pat McCrory vetoed a bill on Friday, sent to him by the Republican-controlled General Assembly, that would have allowed business owners to sue employees who conduct undercover investigations on their property.  House Bill 405, the Property Protection Act, had been criticized by animal rights activists an an “ag-gag” bill, since it could stifle the kinds of secret recordings on hog farms and in poultry plants that have been used to expose inhumane treatment of animals and have resulted in criminal charges.” [10]

The creators of the bill said that it was meant to deter “corporate espionage” from activists. Governor McCrory did, however, support “the purpose of this bill” but did not approve of its lack of protection for those employees who stumble upon illegal activity.  Animal rights groups opposed the bill due to its protection of corporations ahead of the rights of the American citizens to know what is happening and the animals’ rights to humane treatment.